The ACM International Collegiate Programming Contest (ICPC) is one of the oldest, largest, and most prestigious coding contests in the world. Teams of three are given a single computer, 8-11 problems, and 5 hours to solve as many problems as quickly as they can.

The contest consists of three stages: 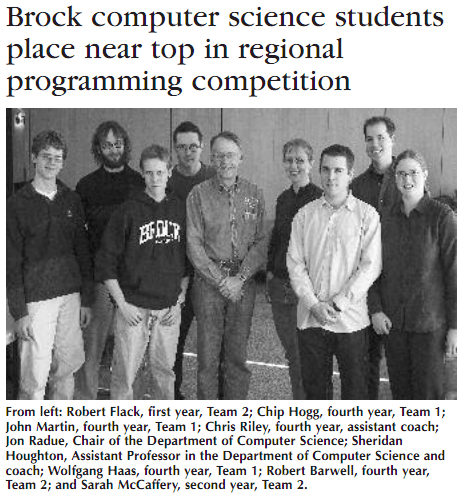 This is my history of competitive coding.

I was in COSC 2P03, Wolfgang Haas was the instructor. He competed in ICPC 2004 and his team placed 11th regionally (see image on the right). He strongly encouraged his class to compete. A coding contest sounded like challenging fun, plus I can be very competitive.

Our student coaches asked everyone who was interested to write down what relevant experience they had. I wrote that I competed in a high school science fair and math competition and performed well in both. That was enough to get me on a team!

My team performed poorly at the contest. I probably learned the most from this contest. Such a terrible performance really makes you analyze what went wrong and brings you back down to earth.

I also organized a contest for individual tryouts this year, which we usually don’t do.

With the help of another student, I organized tryouts again this year. Although I was able to compete, I wanted to sit out and give someone else the opportunity. Instead I did a little bit of coaching and signed up as a reserve just in case. I also met Wesley from QuestToSolve, he was coaching for UofT.

I’ve also competed in competitive team-based hackathons and in the Facebook Hacker Cup. They’re completely different experiences than the ICPC, so I’d recommend anyone to try different programming contests and find the one you like best.

I consider myself an above average programmer, but I’ve learned that I’m an average competitive programmer. I simply don’t spend enough time practicing. For the amount of times I’ve competed, the problems I’ve solved in my free time is embarrassingly low.

So, was it worth it? You bet it was. I’ve had the opportunity to travel numerous times, meet some amazing people, and witness some of the best problem solvers in the country (and the world) work their magic right in front of me. I’ve also improved my problem solving skills, and my knowledge of programming languages (especially C++) – in short, I’m now a better and quicker programmer. I also learned a lot about how contest environments work, how much work it takes to organize your own, and how much work some schools put into preparation. In short, it’s a great oppurtunity for speed learning and gaining some practical experience.

If I could do it all over again, I would try to make the ICPC a higher priority at my school. As it stands, we’re a school that goes into the competition with minimal effort and sometimes we get lucky (when we’re able to recruit the rockstars) and sometimes we don’t. This year I tried to prepare us better, but I think our school takes pride in competing with minimal preparation, and that’ll be difficult to change.

So far we’ve never had a team go to the world finals. Our region is tough, but I think it’s entirely possible. Hopefully I’ll be alive to see it happen!

This content is open source.
Please help improve it.